Observations Of A Mad Jeweler On the Morning Train Ride to work.

Since January 9,  I have been catching the train (subway, for you americans, Metro for other parts of the world)at about 8am to work. One of the really obvious things that I noticed was that most people going to work will avoid eye contact. There's this eerie silence, as no one speaks... Don't dare even to answer the phone as you will get  the deathly stare if you speak.

Yesterday morning the train carriages were really old and rickety. It also smelt awful at first, then the smell was masked by a combitnation of everyone's perfume or aftershave. I'm not sure what's worse...
We were almost at Edgecliff Station, still in the tunnel. The train started to slow and eventually stopped.  No Airconditioning!! Plus it is Australia and the trains are not too clean, compared to Germany or Japan. Then we heard the conductor say: 'Ladies and Gentlemen'.... then there was a big crackle and we couldnt make out what he was saying...a few of us laughed; the man sitting in the corner diagonally opposite from me sort of blew out his breath and started to text (LOL we were in the tunnel underground where there is no reception...).. Other than that there was still that eerie silence...

I'm still not impressed by our trains. They have now introduced the "Opal" card. They were advertising it as being cheaper than a weekly....   What they had NOT said is that ONLY if you travel off peak...

So it's back to the weekly.

The other thing which really awful is the inability to 'Connect To Your Device' in between stations whilst underground.  What happens if the train gets stuck in between stations?? How can you then CALL anyone to say that you will be late?

And for a city that is so International & Fabulous to live in, some things really need to be looked at... and made BETTER

Posted by mettle design studio at 10:10 pm No comments:

Just a Little glimpse of a couple of rings that I've done.

This one is a real blingy Guy ring: 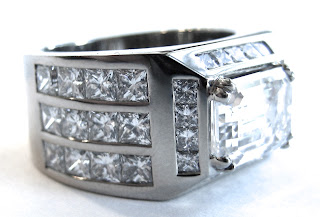 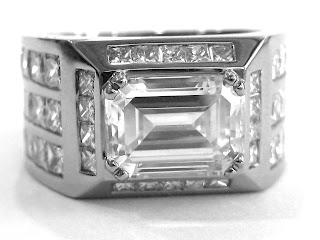 And this one is a more delicate engagement ring with a double wedding ring: 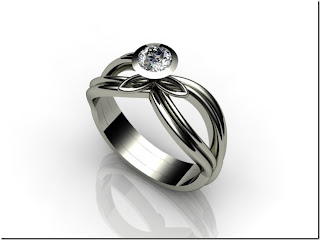 There will vbe more rings coming once I get my torch fixed and can commence soldering again...

A few Months of Injuries.....Sigh

Well, I've probably lost a whole bunch of readers, but then, never mind.... It ceratinly has been a few months of illness and weird eye things for me...

It all started out with the "apprentice" have mini viral attacks that had her miss 2-3 days of school on a weekly basis since mid July. Then I had some horrific (what i thought were migraines) head aches that turned out to be glaucoma attacks! Yuck! Turns out I have closed angle glaucoma.Here is a little bit about Glaucoma:

Glaucoma (the sneak thief of sight) refers to a group of eye diseases that affect the optic nerve and may cause vision loss. Optic nerve damage in glaucoma is primarily due to elevated intra-ocular pressure (IOP) within the eye. Glaucoma is classified either as open-angle (the more common chronic condition which is usually painless) or angle-closure glaucoma (the more unusual type which often occurs suddenly [acutely] and is associated with pain and redness of the eye).  There are no symptoms in the early stages, and by the time the patient notices vision changes, visual loss due to glaucoma can only be halted, not reversed. Glaucoma is usually treated with eyedrops, although lasers and surgery can also be used. Most cases can be controlled well with these treatments, thereby preventing further loss of vision. Early diagnosis and treatment is the key to preserving sight in people with glaucoma.

So then I get my eyes lasered (I think that's called an iridotomy). After which things were fine until I get a hematoma in the right eye. I got a bit scared, but thank goodness, it was not a serious thing...

The next thing that has been happening is that my left hip has been hurting while I sleep at night. Had an xray. The result was that I will eventually need hip surgery...Sigh to that! Tomorrow I finally get to see the specialist. So I will write about that tomorrow.
Posted by mettle design studio at 9:58 pm No comments:

The Lost Ring Of The Lizard King

Reptiles have always been associated with mythology and have been credited with magical and supernatural powers. . Lizards are also associated with the Sun. The movement of a lizard was thought to be able to return sight to a blind person and it also represented good luck and divine knowledge.  Turtles were associated with drought and viewed as the enemy of the Sun God.
It is also believed that Dragons were the true Lizard Kings.
Belonging to the family of extremely large, long-lived winged lizards, true dragons constitute the most advanced race of lizards known, far surpassing other orders in size intelligence and life-span.
The dragon is the most feared and esteemed of beasts. The beast that all the world knows and the creature that never was. It is the impossible creature that exists in art, mythology, religion and legend.
The three predators who most threatened our ancestors The Eagle, the Leopard and the Snake, merge in mythology to become a single creature The Dragon. Classical Greek mythology is alive with Dragons… One of the twelve tasks of Hercules was to defeat a fearsome dragon and Zeus also had an unwelcome encounter… 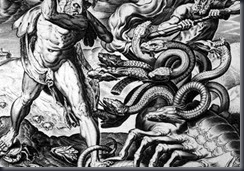 After defeating Cronus, his father, Zeus was confronted by Typhon, Demon of the Whirlwind, a creature created from hundreds of coiled snakes, hundreds of serpents writhing from its shoulders, vast leathery wings and eyes that flashed fire; its roar shook the Earth and flames shot from its gaping mouth.
Fearful of Typhon Zeus fled, taking refuge in Egypt but accused of cowardice, Zeus return to face his formidable mountain hurling enemy. Zeus won the battle at Thrace, wounding and chasing Typhon to Sicily where he crushed him under Mount Aetna. (A thank you to Europas Ice Wolves for some of the Info and the Typhon Image)

Gaea, the ancient Greek earth goddess was impregnated by just one drop of blood that fell from Typhons’s head and gave birth to Actaeus, first King of Athens. When she gave birth to Actaeus, she had an alchemist fashion a ring that was magical and gave it's wearer the power of insight and luck, so that when her son became a man, he would overcome all negative forces..... This ring was stolen and vanished until it was recently discovered jammed between rocks in the Agean Sea by some tourists .
The rest you know.... 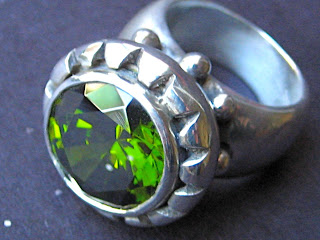 This is the Lost Ring of the Lizard King.....

I am offering buyers a 10% discount with this coupon code: QLDFLOODAPPEAL
So sign in to my etsy store here: howlindoggie and make a purchase. You will receive 10% discount and I will donate 15% of that sale to the Queensland Flood Appeal. Leave a comment with your favorite piece of mine & you may win a pair of earrings at the end of January. I will pick out a name randomly and announce the winner on my etsy shop.

Thank you In Advance.
Posted by mettle design studio at 11:23 pm No comments:

People who Drop by

Some of My Work

This is a Flickr badge showing items in a set called Japanese Influence. Make your own badge here.

mettle design studio
Sydney, australia, Australia
Mettle Design Studio is Ceeb Wassermann's Studio. Ceeb Wassermann is a Sydney-based jeweller/jeweler who takes inspiration from her extensive experience in gold & silversmithing. Trained in Australia, Germany & Switzerland and grew up in Europe and traveled the world quite extensively. Ceeb likes to capture the serenity and beauty of the ocean and her love of 'japaneseness' in her work. She is a great fan of Japanese Design, especially 'Kamon' which are like family 'crests'... Her range of work is currently available in Australia, the US & Germany and several on line shops as well. Ceeb has built up a strong local and international following with her work exhibiting in Sydney, LA, NYC , Zurich & Berlin and is now available here.

I'm on DaWanda too!

SOME OF MY FAVORITE THINGS

These are some of my fave's. i will also show you some other items i already have that i just adore!